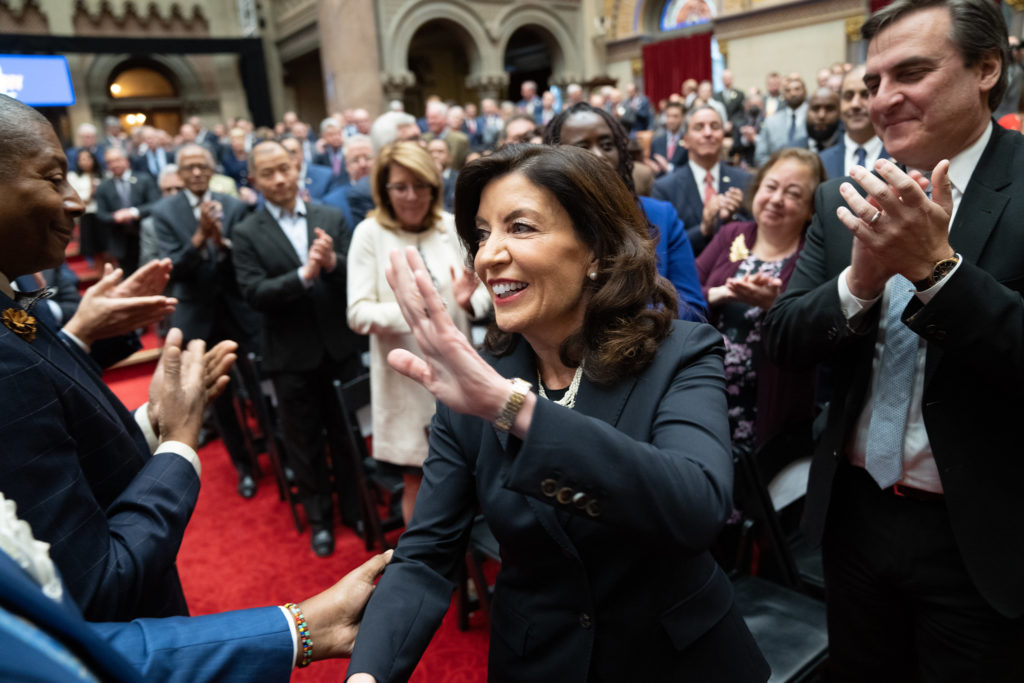 The idea is winning over skeptics. Will the harmony last when it’s time to hammer out the details?

GOVERNOR KATHY HOCHUL on Tuesday announced a plan to put an economy-wide price on carbon, which, if adopted, could mark one of the most sweeping plans in the country to ditch fossil fuels.

The plan, known as “cap and invest,” would require businesses to buy allowances to pollute, gradually reducing the number of allowances — the cap — until emissions are brought down by at least 85 percent, in line with New York’s climate law. To get there, the state would invest revenue from the allowance sales in efforts to cut pollution, like installing electric vehicle chargers, weatherizing buildings, and replacing fossil fuel appliances with electric ones.

Hochul’s proposal first emerged from the state’s Climate Action Council, which formally recommended cap and invest in December as part of its roadmap to meet the climate law.

New York wouldn’t be the first state to adopt such an approach: California has had a cap-and-trade program since 2013, and Oregon and Washington adopted their own versions in 2020 and 2021, respectively. But, if the final plan meets the standards the climate council proposed, it could be the most rigorous. And given the scale of New York’s economy — the third-largest in the country after California and Texas — it could set an important national precedent.

“We’re pursuing a nation-leading cap-and-invest program to cap greenhouse emissions, invest in the clean energy economy, and prioritize the health and economic well-being of our families,” Hochul said in her State of the State address.

The approach “offers us flexibility, so we can focus our efforts on the biggest polluters and ensure families, farms, and small businesses aren’t crushed by costs,” she added.

The outline she released on Tuesday largely matches the one prepared by the climate council, while highlighting one critical element of the proposal and giving it a name: a “universal Climate Action Rebate,” which would distribute a portion of the revenue raised directly to every New York household, offsetting increases in their energy costs. The governor’s office estimates that the rebate could put more than $1 billion per year back into New Yorker’s pockets.

Cap and trade has sparked bitter debates everywhere it has been attempted, from California to Europe. But Hochul’s proposal has so far been broadly welcomed — if only because so much about it remains up in the air.

Everyone from progressive climate activists to the power industry lobby to the fiscally conservative Citizens Budget Commission echoed the sentiment.

NY Renews — the broad coalition of environmental, community, and labor groups that spurred the climate law’s passage in 2019 — was originally wary of the cap-and-invest proposal. But it appears to be coming around. On Tuesday, the coalition said Hochul’s directive “could set a national standard for climate action.”

“A program that caps and then ratchets down on greenhouse gas emissions, while raising money from polluters to spend on climate solutions, has a lot of promise,” said Katherine Nadeau, program director at Catskill Mountainkeeper and a steering committee member of NY Renews.

“We have to just be careful that if we go down this path, we don’t replicate the mistakes that have been made in other states and countries,” Nadeau told New York Focus. “We have to make sure that we put justice and equity at the center of any programs, so that cap and invest doesn’t create pollution hotspots and toxic hotspots, or further deepen them, in environmental justice communities.”

Hochul vows that she has taken the message to heart, and that her program will “prioritize the disadvantaged frontline communities across New York state that have suffered from pollution and environmental injustice for far too long.” At least 35 percent of investments under the plan are slated to go toward disadvantaged communities, as the climate law requires.

Still, advocates stressed that cap and invest must be carefully designed to avoid loopholes like offsets — echoing the council’s recommendations — and that the scheme alone will not be enough to bring environmental justice to New York.

“No cap and invest scheme can be effective without simultaneous action to close the polluting fossil fuel plants that are hurting frontline communities the most,” said environmental justice advocate and attorney Raya Salter, a member of the Climate Action Council.

“If done correctly, cap and invest will reduce emissions while preserving industries and jobs,” said New York State AFL-CIO President Mario Cilento in a statement. (Cilento voted in favor of the plan as a member of the Climate Action Council.)

Gavin Donohue, one of the few council members to vote against the climate plan last month, also said he backed cap and invest in its broad strokes, while noting that some of the details could prove “incredibly polarizing.”

Among them is deciding which, if any, industries or facilities will get carve outs to “ensure New York industries are not put at a competitive disadvantage and emissions are not pushed out of state,” as Hochul’s State of the State book puts it.

“How you determine who gets allowances and who doesn’t, and who has to pay for them, is going to be incredibly controversial,” Donohue told New York Focus.

It’s also critical that the allowance price be set high enough that it actually pushes companies and consumers away from dirty fuels, he said.

“You need to have the political courage to actually put a real price on carbon and let the market dictate what that price is, and that’s a risky thing for any politician to do,” Donohue said — because it means consumers will feel the consequences in their wallets.

“We want clean stuff, we want it reliable and available all the time, and we want it cheaply, and I don’t see how all those three things comport with each other,” he said. “That, to me, is almost an impossibility.”

Pete Sikora, climate and inequality campaigns director at the progressive advocacy group New York Communities for Change, raised doubts that $1 billion in annual rebates would be enough to ensure that the transition is affordable to working-class New Yorkers — the top criterion that Hochul has set out.

Another potential sticking point lies in how Hochul plans to implement cap and invest: chiefly through executive action, in a year-long rulemaking process undertaken by the state’s Department of Environmental Conservation alongside the energy authority NYSERDA. Hochul acknowledges that some elements of the plan, like the universal rebates, would need to be written into law, and she said she would include the corresponding legislation in her executive budget.

But lawmakers may not be satisfied with signing off on portions of the plan while leaving the core of it up to the governor. This approach also exposes the state to potential lawsuits, like the one brought by a power company when New York joined the Regional Greenhouse Gas Initiative — a more modest cap-and-trade scheme covering only power plants — in 2009.

Despite its relatively warm reception on day one, cap and invest faces a long fight ahead.